An Essex girl through and through

I first met her in Tolles­bury and imme­di­ately fell for her. She was an ­Essex girl through and through but not like all the oth­ers, although she was shal­low. As far as I could see then there were only two prob­lems. There was a big age difference—fifty-five years. She was born in 1904 and I was ten back then in 1959. None of this mattered to me but the second prob­lem would be trick­i­er: my Dad loved her too.

We had all come, my Dad, Mum, broth­er, sis­ter and me, to Tolles­bury. We often did to look at the boats and to hear the oyster­catch­ers and the cur­lews, to play along the wind­ing mud paths that edged the salt­ings. That spring morn­ing it was cold crisp and clear.

As usual the tide was out. I never really under­stood that. It didn’t seem to mat­ter when we arrived; the tide was invari­ably out reveal­ing expanses of dark grey greasy, beau­ti­fully evil-smelling mud. Usu­ally that meant time to explore the paths and creeks and to gaze in some awe at the huge hulks of boats left to spend the last of their days in these won­der­ful safe anchor­ages.

There were old smacks and baw­leys, the odd Thames barge and even, to my never-end­ing delight, the hulls of fine-lined, multi-crewed J-Class yachts. It never seemed sad that these once proud work­ing and leis­ure boats should end up here. It seemed right that the com­munity that provided the men to sail them should wel­come them back at the end of their work­ing lives. The ribs of an even earli­er gen­er­a­tion of boats bore wit­ness to the fact that this was the way they did things in these parts.

But today was dif­fer­ent. We were meet­ing someone. Dad drove the big Hum­ber Super Snipe estate past the Hope pub and through the gate in the sea wall. He parked up along­side the four dis­tinct­ive sail lofts and we all piled out with, in my case, a mix­ture of trep­id­a­tion and excite­ment. I was not sure about meet­ing new people but I had caught the mood of expect­a­tion from Dad and Mum.

We ran up the steps to one of the lofts. These large simple three storey tim­ber sail lofts were ship­lapped against the weath­er and raised on great con­crete piles above the level of all but storm driv­en floods. Dad was shak­ing hands with a large smil­ing man wear­ing paint-spattered trousers and a fisherman’s smock. He invited us all in through huge slid­ing doors.

It wasn’t the vast space that cap­tiv­ated me; it was the smell. A glor­i­ous mix­ture of paint, anti-foul­ing, tarred twine, var­nish, rub­ber waders and damp can­vas sails engulfed us. We found that the man was called Ron. I had never met a Ron; it soun­ded funny. Ron took us to look at a huge set of freshly var­nished spars. There was a long wooden mast com­plete with a but­ton top; a huge and heavy boom with strange and elab­or­ate wooden fix­ings the pur­pose of which I could only guess at; a gaff with the largest jaws I had seen; a smal­ler spar that was less than six feet long and an even smal­ler yoke-shaped spar that turned out to be cross-trees.

Next to them were two full can­vas bags and the most enorm­ous white, worn, can­vas main sail. In the corner of the loft was a huge pile of rope, rags, tins, kapok life-jack­ets and what looked like mat­tresses.

‘Your fore­sails are in those bags and as you can see the rest is ready for you.’

Ron didn’t speak like an Essex man. He was prob­ably from Hert­ford­shire like us, I decided. But what did he mean ‘ours’? What use was all this stuff? We only had a little dinghy and that was only a row­ing boat we bor­rowed from Frost and Drake, the local boat­yard. Fine for explor­ing the creeks at high tide but you couldn’t fit sails—let alone these mon­sters.

But I had no time to ask for we were off out­side. We fol­lowed Ron into the mud flats. It was not only hulks and big boats that found their way to the Tolles­bury shoreline. Near­er in, the salt­ings were used by small pleas­ure craft and the fin­ger creeks and path­ways provide an excel­lent if muddy tidal mar­ina.

My broth­er and I would argue over the mer­its of each dinghy and small boat. We would hardly give the motor boats a second look. Dad said sail was the thing and that was good enough for us. But we did argue about the sail­ing boats. Bryan was a mod­ern­ist; after all he was seven and a half. He pre­ferred the shiny new glass fibre boats with their alu­min­um spars. Me, I was a tra­di­tion­al­ist. I had seen rather more of life, and only the solid­ity and depend­ab­il­ity of a prop­er wooden boat would do for me. But then we would argue about any­thing, Bryan and me.

We struggled along a muddy dyke in single file. Ron led on to a planked walk­way sup­por­ted on large wooden posts. Dad, Bryan and I fol­lowed. Mum trudged a little behind keep­ing a firm hold on Kate who was four and a half and fear­less. Left to her­self she would ‘explore’ up to her armpits in the mud so Mum held on to her, and being the eld­est I thought it my duty to look out for her too. I always took duty ser­i­ously.

The wind whistled across the flat land­scape, and the slap slap of hal­yards on masts joined the cur­lew cries and the ever-slurp­ing mud to cre­ate the sig­na­ture tune of the swatch­ways. Only the masts of the boats and the odd withy raised them­selves above the salt­ings. But it wasn’t dull. There was such a lot of sky, clear and blue with white cumu­lus clouds today, stretch­ing from hori­zon to hori­zon. Tomor­row was just as likely to be grey streaked and stormy. Whatever it showed you, there was so much of it that you were bound to be swept up in its mood.

Ron stopped and we all bunched up on the dyke look­ing down at a boat nest­ling in the mud. I couldn’t believe it. Was this what we had come to see? Was Dad really inter­ested in buy­ing this one? She was gor­geous, almost thirty feet long and a tra­di­tion­al wooden boat with—to my eyes—just glor­i­ous lines. Alright she had a blunt stern and was broad in the beam. She had a flat bot­tom with no obvi­ous keel and she had funny large metal plates hung on each side. But she was long with a beau­ti­ful rak­ish bow and had a large cock­pit with seats enough for us all. Her cabin was low and clean-lined with real portholes. It exten­ded from the cock­pit all the way for­ward to the mast—or where the mast should have been. I real­ised now her mast was the one we had seen in the sail loft. I always was quick on the uptake. For­ward of the mast hole was a large square fore-hatch and a real cap­stan. Just to make it per­fect for me there was a stove pipe with a cool­ie hat cowl. Just like Joe, Bill and Pete had on the Death and Glory.

She was a sym­phony in grey and rust. Old grey-painted sides matched old grey-painted coa­chroof and decks. The cock­pit was grey with flaky black-painted wood­work, and those strange metal plates were painted grey and pit­ted and streaked with rust. All the metal­work was painted grey—the shroud plates, the fair­leads, even the tiller were all grey. And her name was nowhere to be seen.

‘There she is. Will you come aboard?’ We didn’t need ask­ing twice and Ron and Dad helped us crowd into the cock­pit. Ron opened the pad­lock on the cabin doors and slid back the hatch to the dog­house. Bryan and I fought to get the first view of the interi­or and were pulled out of the way by Mum for our troubles. Even­tu­ally we all went down the three steps to the cabin below and squeezed ourselves in round the table. The cabin was low and dim and the first thing I noticed was the black metal stove, unlit now, in the for­ward corner on the star­board side. At the foot of the com­pan­ion­way (a posh name for three steps, but that was what we called it) was a gal­ley with a cook­er on the port side and sink to star­board.

There were two nar­row benches with mat­tresses on either side of the table and Ron showed us the stor­age lock­ers beneath. I got my first sight of the bilges. I was sur­prised at how close it all was. The only big boats I had been on had deep keels and deep smelly bilges. Here there was barely three inches below the floor boards to the slimy damp bot­tom planks.

A door divided the main cabin from the fore­peak. Here was a fas­cin­at­ing space that went to a point right into the bows. There was a large double bunk with room to sit up only at the head end next to the mast. We all had to try it out. Your legs had to extend under the low fore deck. In the bow itself there was an open lock­er that held large amounts of heavy anchor chain, and a space for sails and rope.

Between the main and fore cab­ins was a hanging lock­er for clothes on the star­board side and the most com­plic­ated and fiendish-look­ing toi­let I had ever seen, with a Heath Robin­son arrange­ment of levers, pumps and handles to oper­ate it. I thought it all looked won­der­ful and the damp and gloom of the sur­round­ings was to me atmo­spher­ic, although I think Mum had other views. But then it happened. Dad looked at Mum and said he thought it had poten­tial. She agreed. Dad said the price was fine and he shook Ron’s hand.

Ron pulled out a pair of name plates from a lock­er behind a berth.

On them was carved the name of the boat that was to provide us with forty years of ser­vice.

The boat was called ‘Nan’. She was straight out of an Arthur Ran­some story. Per­haps I would be a Death and Glory boy or, bet­ter still, maybe we would mean to go to sea.

From Travels with my Nan by Nick Imber 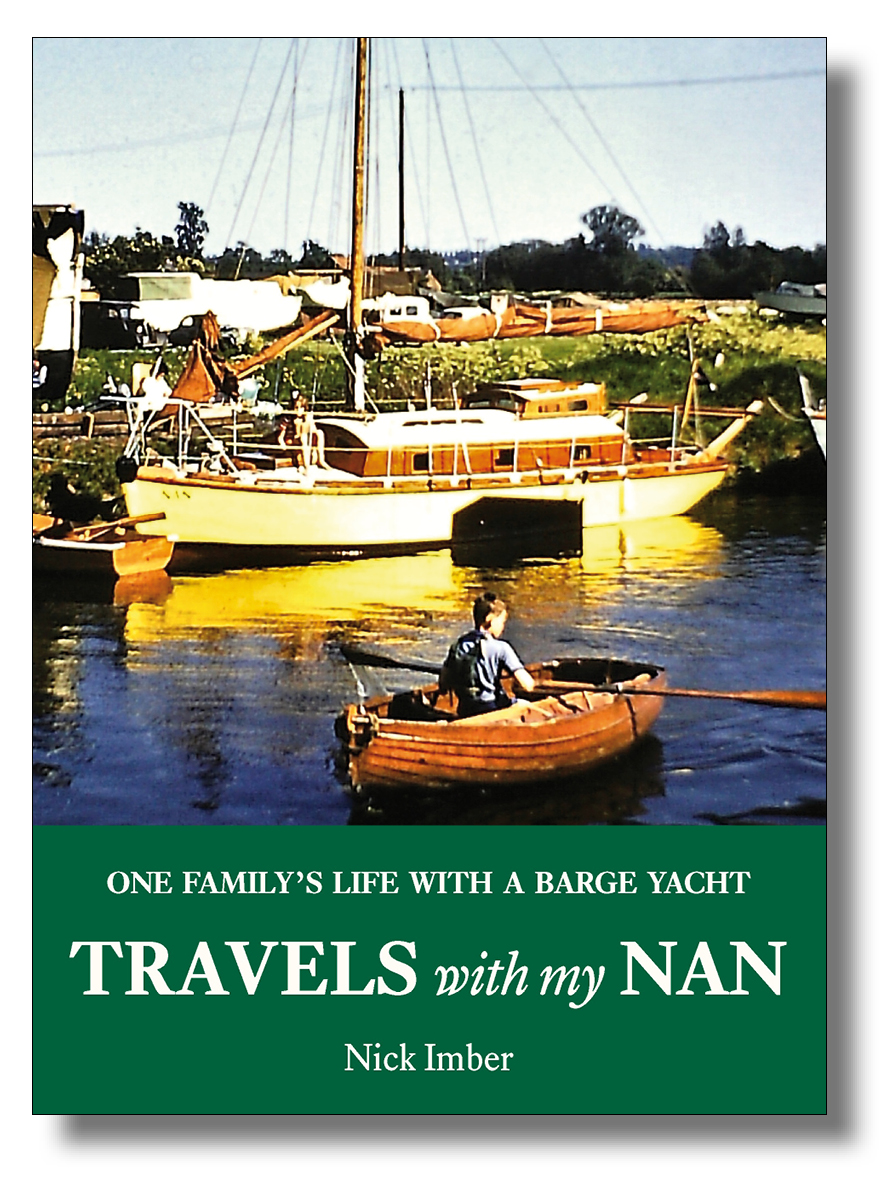