By March of 1954 we had enough money for me to stop work­ing and begin build­ing in the farm loft. I cleared the chick­en shit out, blocked up the gaps in the walls and lev­elled the floor. Building a small boat alone is like an exer­cise in med­it­a­tion; through­out the sum­mer I worked on my dream. The boat could have been built faster, but my fath­er along with his head car­penter would occa­sion­ally visit to see my pro­gress. This head car­penter was of the same ilk as the boat build­ers I had worked with at Thorneycroft. Each visit was like an examination.

On her days off, Ruth would come to sand, paint and put her fem­in­ine spir­it into the boat. She was not the only fem­in­ine spir­it; anoth­er young German girl, Jutta, vis­it­ing my English friends came to the boat­shed and asked: ‘Can I help?’ To test her sin­cer­ity I gave her the unpleas­ant job of paint­ing inside the small end hold. She did it without com­plaint. Then one day she said: ‘I would like to sail the oceans with you’. I knew that my planned voy­age across the Atlantic on this small double canoe, to prove Thor Heyerdahl’s the­or­ies wrong, could be very hard and pos­sibly very dan­ger­ous for a young out­sider. Éric de Bisschop had shown that the double canoe was sea­worthy, how­ever his Kaimiloa was 38ft long; my little double canoe was only 23ft 6in. Éric had sailed thou­sands of miles across oceans even before his double canoe voy­age. I was a begin­ner at off­shore sail­ing and to encour­age a young girl to join as crew was not sens­ible. I poin­ted out the hard­ships and danger that we might meet on the voy­age. Her answer was: ‘I was in Berlin when the Russians came, I know and have seen hard­ships’. At that time the story of these war­time hard­ships and hor­rors was not gen­er­ally known out­side Germany. I did not fully real­ise what, as a girl of seven, she had seen and exper­i­enced. So I gave a grudging prom­ise of ‘maybe’ and she returned to Germany.

By September I had fin­ished the boat in the barn loft, got it down to ground level without dam­aging the loft or the boat, and assembled the two red painted hulls, with their unit­ing beams on which I laid the slat­ted decks, into my darling little Tangaroa.

Compared to my adven­tur­ous hard liv­ing in the moun­tains, the accom­mod­a­tion on Tangaroa seemed lux­uri­ous. Others described it as liv­ing in two coffins, or more politely two ward­robes on their sides. I decided to launch Tangaroa on the Thames estu­ary. From Manchester to Burnham-on-Crouch in Essex was about 200 miles. Some young friends who were start­ing up in the build­ing trade said if I gave them some help to fin­ish a con­tract, they would load up Tangaroa on their lorry and trans­port the boat, Ruth and myself ‘free’ to Burnham.

We loaded up, col­lec­ted our last gear from my par­ents’ house and said our good­byes. Driving down the road I real­ised I had for­got­ten some­thing and went back to find my strong, power­ful moth­er weep­ing. Adventure for sons can be anxi­ety and sor­row for moth­ers. However I grabbed my for­got­ten gear, joined Ruth and my friends on the lorry and off we went. My build­ing friends had a great time unload­ing the boat, assem­bling it and launch­ing it. They drank the launch­ing beer and sped back to Manchester to their next week’s work.

I climbed on board alone. ‘Hello Tangaroa’ I whispered. Ruth joined me. We looked into the hull compartments—no leaks! Next day Ruth and I togeth­er struggled to raise the tall mast. Still sweat­ing we hois­ted the sails, truth­fully quite small com­pared to my later boats. Tangaroa ‘took off’, she leaped for­ward out of con­trol; I had never exper­i­enced such rapid boat acceleration—and, out of con­trol, we rammed her into a mud bank.

Dejectedly I hauled the sails down, bit­terly think­ing my design was a fail­ure, and who was I to recov­er the lost art of Polynesian double canoe sail­ing? Ruth made me a cup of tea and began the woman’s job of rebuild­ing a man’s ego. Encouraged, we hauled off the mud waist deep in cold muddy water and tried again. This time ­Tangaroa tacked and tacked again—we had a sail­ing boat.

But it was late in the autumn and to sail down the English Channel and across the Bay of Biscay would have been tempt­ing the sea gods. On advice we sailed up the River Colne to spend the winter in the water­side vil­lage of Wivenhoe, to get jobs and wait until springtime.

I have described how step-by-step I learned aspects of life, boat design and boat build­ing. By chance Wivenhoe gave me my final study course in the atti­tudes I needed to become an ocean sailor.

Sailing up the river Colne we passed a tall shed-like build­ing, behind which the vil­lage of Wivenhoe came into view. We spot­ted a simple wooden walk­way over the mud, to which we tied up, and went ashore to a row of small cot­tages. One had the mes­sage ‘Notice—boats and gear stored at owner’s risk’ beside the door.

Out of the cot­tage came a small, alert white-haired man, wear­ing a peaked cap and a dark blue fisherman’s sweat­er, bearded with pipe in mouth. Bob Eves, eighty years old, was a retired legendary barge skip­per who first went to sea at the age of twelve in 1886. He spent most of his life sail­ing flat-bot­tomed, lee­board, sprit­sail barges up to 80 feet long. Such sea craft were once a major trans­port sys­tem in the Thames and coastal waters. Their cap­tains were men of legend.

Enquiring of him in his small liv­ing room as to wheth­er we could moor our boat on his pon­toon for the winter, we struck an imme­di­ate rap­port. He later came to refer to me as his ‘Mate’. This was an hon­our. Ruth impressed him just as much, as he later told us she reminded him of his beloved late wife. 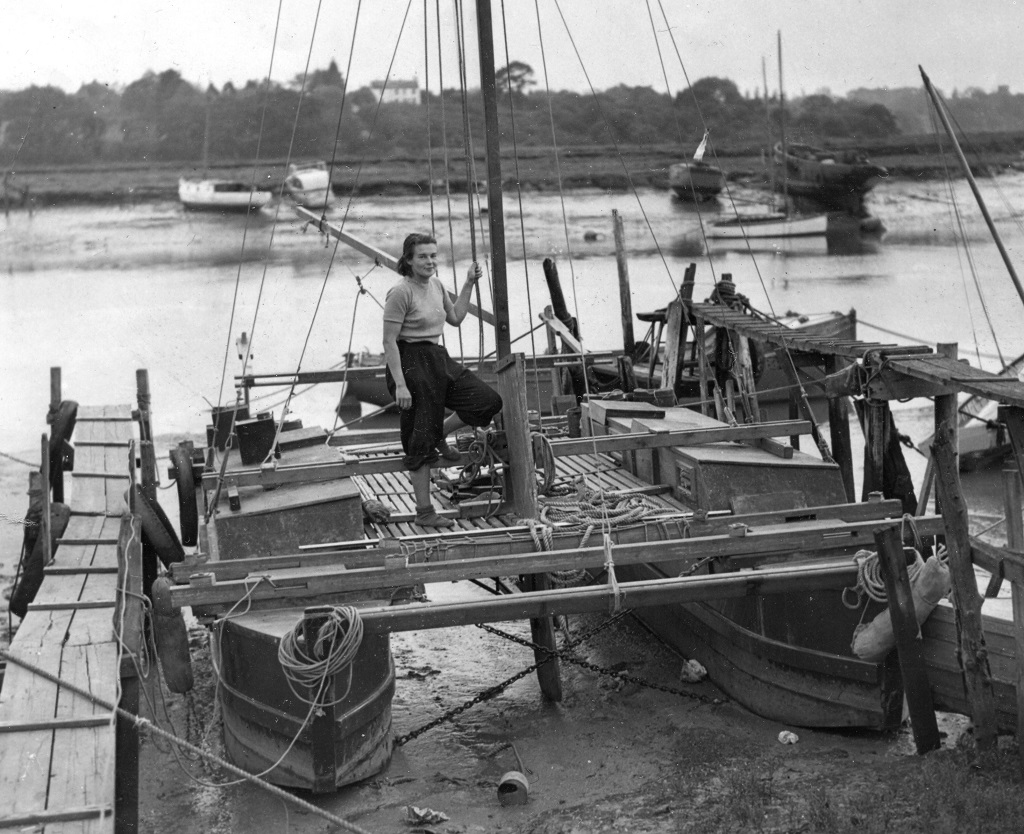 Ruth got a job in a small sardine-can­ning fact­ory; I got a job in the nearby town of Colchester as machine moulder in an iron foundry, a job I had done years earli­er when I had looked for my dream boat in Sweden. When both of us returned ‘home’ Bob would have kettles of hot water ready so we could wash off the grime and fish oil. Then would begin the dis­cus­sions and remin­is­cences; from Bob I learned to think as a ‘Sailorman’.

Bob was not the only man of the sea in Wivenhoe. There was a soli­cit­or in the vil­lage, John Donnelly, who in the imme­di­ate pre-war years had sailed around the world as bosun on a 118-foot engine­less bar­quentine called the Cap Pilar. He was a tra­di­tion­al square-rig­ger ocean sail­or. We used to babysit for him and he showed the con­cerned atti­tude of an older broth­er towards our sail­ing dreams.

Soon after we arrived in Wivenhoe, the cot­tage next door to Bob was bought by a tall, grey haired Mr Cully, as his retreat from a ‘some­where upcoun­try’ wife and domest­icity. He had been a judge in Siam—now Thailand—where, at the same time as the Cap Pilar was cir­cum­nav­ig­at­ing the world, he had a 45ft schoon­er built in the finest teak, from the board of the great American schoon­er design­er John Alden. With a crew of four Malays he sailed her to Britain via the Red Sea and the Suez Canal, just before the 1939–45 war broke out. At that time not many yachts had made such a voy­age. He made his at the same time as Éric de Bisschop was sail­ing his Kaimiloa from the Pacific to France via the Cape of Good Hope.

There was also a dear old man in the vil­lage called ‘Tiny’ (John) Howlett, being looked after by his devoted Chinese ser­vant. I still have a copy of his book, Mostly about Boats.

All these men cir­cu­lated around the Nottage Institute, set up in the 1890s to train local work­ing boat sail­ors and trans­form them into pro­fes­sion­al yacht crews. There, dur­ing that winter, Ruth and I learned how to sew sails in the tra­di­tion­al meth­od, stitch­ing by hand. These exper­i­enced small boat sail­ors treated us as ser­i­ous-minded pupils, indeed Wivenhoe at that time was a sea ver­sion of the early medi­ev­al uni­ver­sit­ies I have described earlier. 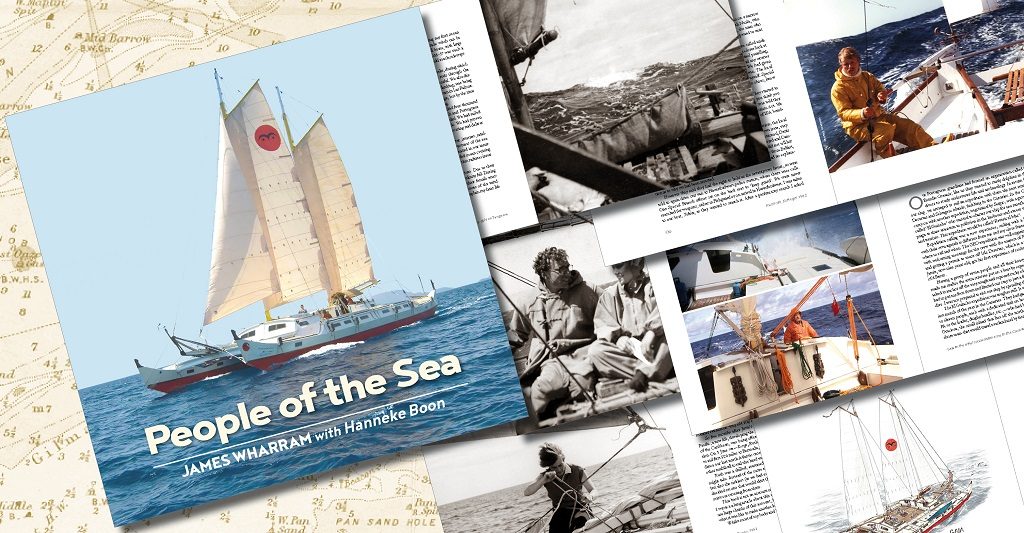 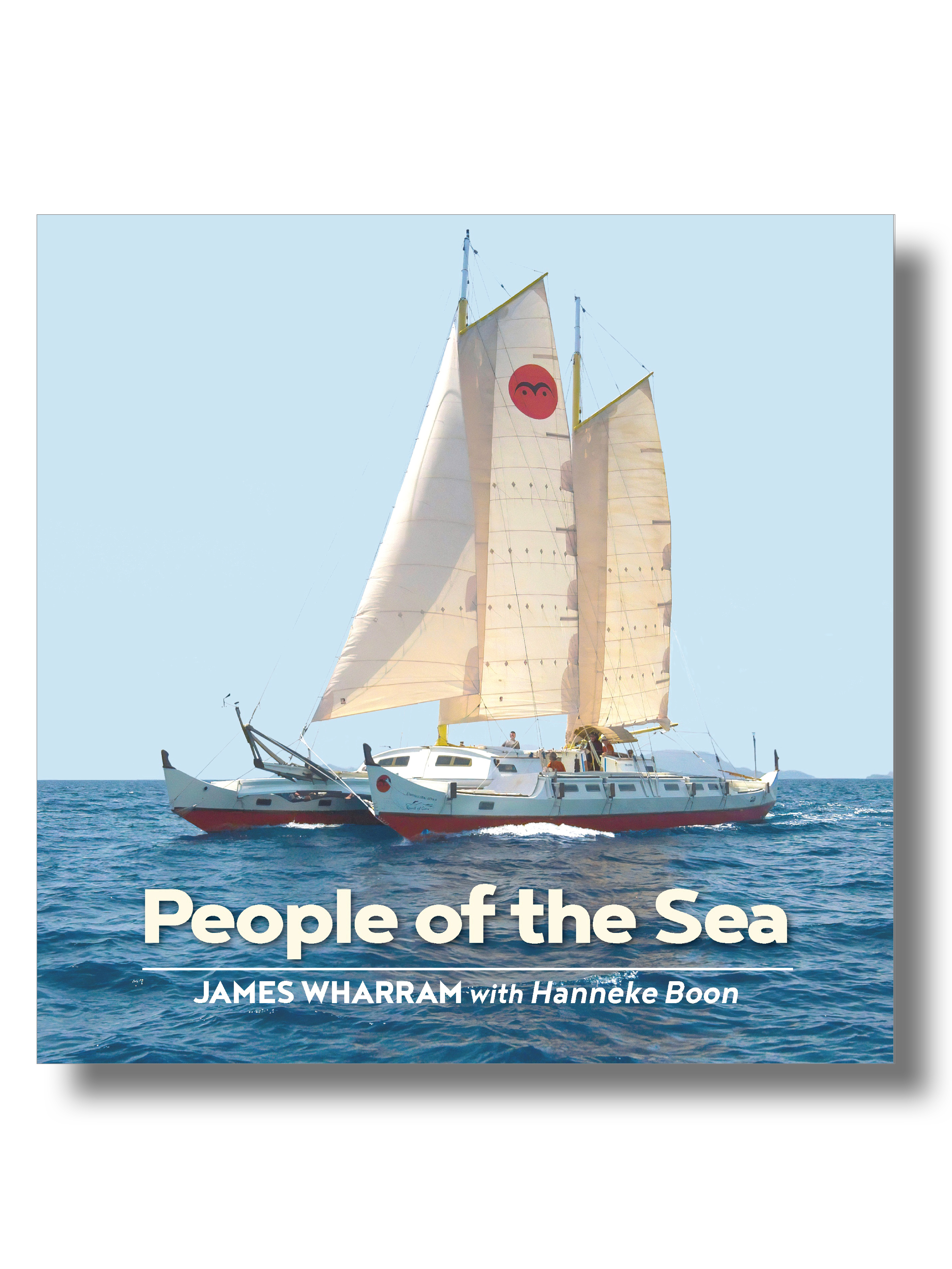